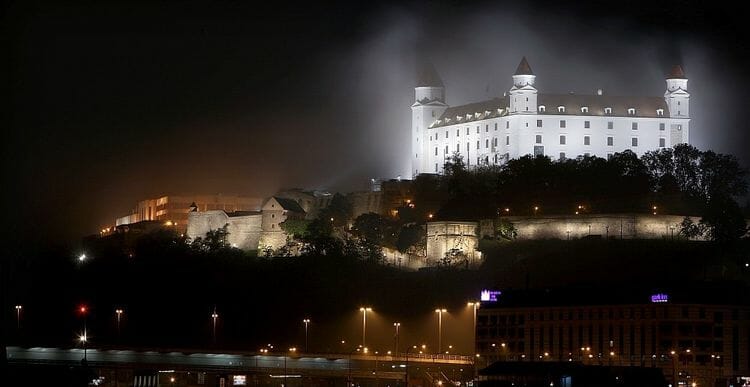 Bratislava is at the centre of Europe, in the extreme southwest of Slovakia. The edge of the city actually forms Slovakia's borders with Hungary, to the south, and Austria, to the west, making it the only capital city to border two neighbouring countries. In addition, the Czech Republic is only 62 kilometres away. The Austrian capital Vienna is only 60 kilometres distant, making them among the world's closest capital cities.
8.5
20 reviews

Bratislava's position right at the very heart of Europe, on the banks of the River Danube, predestined the city to become a crossroads and destination for trade routes, as well as a centre for various cultures. The first traces of permanent settlement here are associated with the late Stone Age. At around the time of the birth of Christ the Romans discovered the strategic importance of the site that Bratislava now occupies. They did not settle the area permanently, but instead built military camps which also served to protect strategic trade routes. During the migration of peoples, at around the middle of the first millennium AD, the Slavs settled in the area of present-day Bratislava. Led by Samo, a Frankish merchant, they formed an empire named after him – the first known organised community of Slavs.At the end of the 10th century the Kingdom of Hungary was formed, and under the rule of Stephen I (1001-1038) the territory of present-day Bratislava was annexed to it. Bratislava became a key economic and administrative centre on the kingdom’s frontier. This had its downside in the shape of frequent onslaughts by enemy forces. Bratislava's fortunes took an unexpected turn in the 16th century. In a pivotal battle with the Ottoman Turks at the Battle of Mohacs in 1526, Hungary's King Louis II was killed. Despite the candidature of John Zapolya and resistance from a large part of the Hungarian nobility, it was decided in Bratislava’s Franciscan church that Ferdinand Habsburg would be appointed the new king. In the 18th century Bratislava became not only the largest and most important city in Slovakia, but in the whole of the Kingdom of Hungary. This century saw the construction of many splendid palaces by the Hungarian aristocracy, as well as numerous churches, monasteries and other clerical buildings. The castle was extended and new streets appeared as the population of the city quadrupled. The Hungarian Diet held its meetings, kings and queens were crowned here, and the city's cultural and social life thrived.

Bratislava lies on the banks of the Danube, the second longest river in Europe, and at the foot of the Small Carpathian hills. The Middle Danube basin begins at Devín Gate in western Bratislava. The city forms part of the Bratislava Region, one of eight into which Slovakia is divided. The city covers a total area of 367.58 square kilometres. Bratislava has a mild continental climate, characterized by wide differences between temperatures in summer and winter, as well as by four distinct seasons. In recent years, however, the transition from winter to summer in Bratislava has tended to occur without a typical spring, with freezing winter weather changing abruptly to warm summer temperatures from one day to another.

Bratislava Castle
The castle, on a hill above the old town, dominates the city of Bratislava. It features in the first written reference to the city, which appears in the Annals of Salzburg of 907, in association with a battle between Bavarians and Hungarians. The castle hill was populated as early as the late Stone Age; its first known inhabitants were the Celts, who founded a fortified settlement here called ‘Oppidum’.
Devín Castle
Devín Castle, a national cultural monument, is located at the foot of a cliff above the confluence of the Danube and Morava Rivers. This strategically important site has been settled since the late Stone Age by a succession of groups, from the Celts to the Romans, the Goths to the Lombards, and many more.
Grassalkovich Palace
This rococo summer palace was built in 1760 for the chairman of the Hungarian Royal Chamber and advisor to Empress Maria Theresa, Count Anton Grassalkovich. The sumptuous house was a sought-after venue for aristocratic society events. The palace is now the official residence of the President of the Slovak Republic.
Slavín War Memorial
The gigantic Slavín war memorial is visible from much of the city. On a hill overlooking the castle, it commemorates the city's liberation by the Red Army in April 1945. It is also a cemetery for 6,845 Soviet soldiers who died during the battles for the city and the surrounding region that took place in the final weeks of World War II.